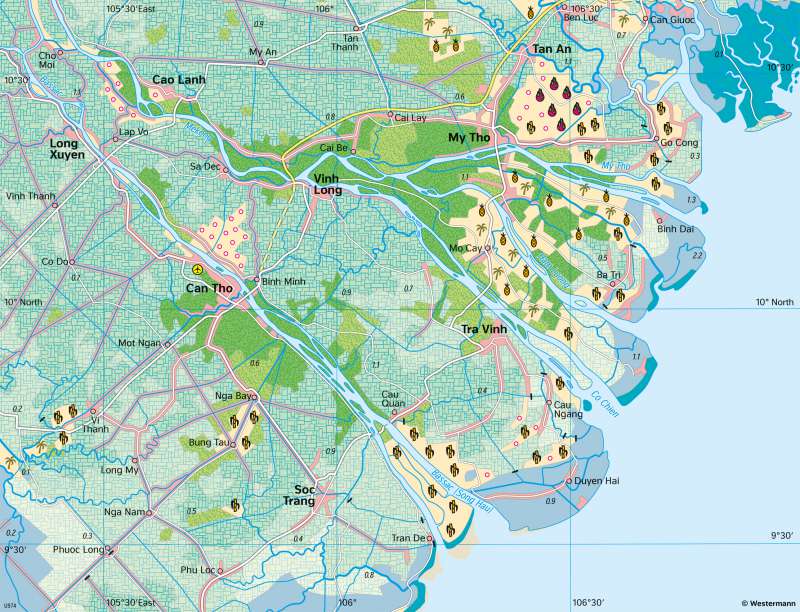 The Mekong Delta is a region of 40,000 km² in South-western Viet Nam. Here, the river splits up into several tributaries which flow into the South China Sea. Today, the region is inhabited by about 20 million people. There are only few cities, the biggest being Can Tho with about 1.5 million inhabitants. Most of the people live in villages which are often extending along the canals and waterways of the region. Many parts of the delta can be reached by highways and road infrastructure, but there are only few bridges crossing the arms of the Mekong. So boats are the most important means of regional transportation there, both for people and goods.

Agriculture in the Mekong Delta

The Mekong delta is one of the centres of agricultural production in Vietnam and South East Asia. The region is nicknamed Vietnamâ€™s rice bowl, because its rice fields make up 50 % of the total area used for rice production in Vietnam. The country itself is the third biggest exporter of rice globally. In the delta region, about 80% of the population are involved in the rice production.

The map shows that the majority of the area is used as rice paddies. In the central parts, rice is harvested three times a year. This is possible due to the use of agrochemicals and fertilizers. The closer the paddies are to the sea and the more low-lying they are, the higher the soil salinity and the lower the fertility becomes. So in the South-west, rice is only harvested once or twice a year.

Besides rice, the Mekong delta produces many other agricultural products. Whereas close to the cities of Can Tho and Cao Lanh the vegetable production dominates, in the east of the delta region cash crops and fruits are farmed, e.g. pineapples, bananas and dragon fruits. Some of the fruits are farmed on plantations, and some in forest-like orchards which are e.g. located along the tributaries Bassac or Co Chien.

Aquaculture in the Mekong Delta

Directly at the sea, the mangroves have been deforested to create space for aquaculture, mostly for shrimp or catfish production. Both branches have exploded in the last decades. For instance, Vietnam’s shrimp exports grew by 500% between 2000 and 2020. Consequently, the delta region suffers from the general ecological effects of aquaculture.

Aquaculture in the Mekong Delta

Directly at the sea, the mangroves have been deforested to create space for aquaculture, mostly for shrimp or catfish production. Both branches have exploded in the last decades. For instance, Vietnamâ€™s shrimp exports grew by 500 % between 2000 and 2020. Consequently, the delta region suffers from the general ecological effects of aquaculture.

The area shown in the map lies between 0 and 2 metres asl. As a low-lying region, it is subjected to severe flooding hazards. As a natural protection by mangroves forests is missing in many parts of the coast, coastal erosion is high. However, the land area still grows by the river sediments deposited at there. There is also the risk of salt water intrusion, especially in the lowest lying regions in the South of the map. This is confronted by a number of tidal barrage systems, protecting the rivers from being flooded by sea water.

With an expected sea-level-rise of 1 m within the 21st century, many regions of the Mekong delta will be flooded by 2030. Suggested solutions for this problems range from dyke systems to a reforestation of mangrove swamps along the coastline.