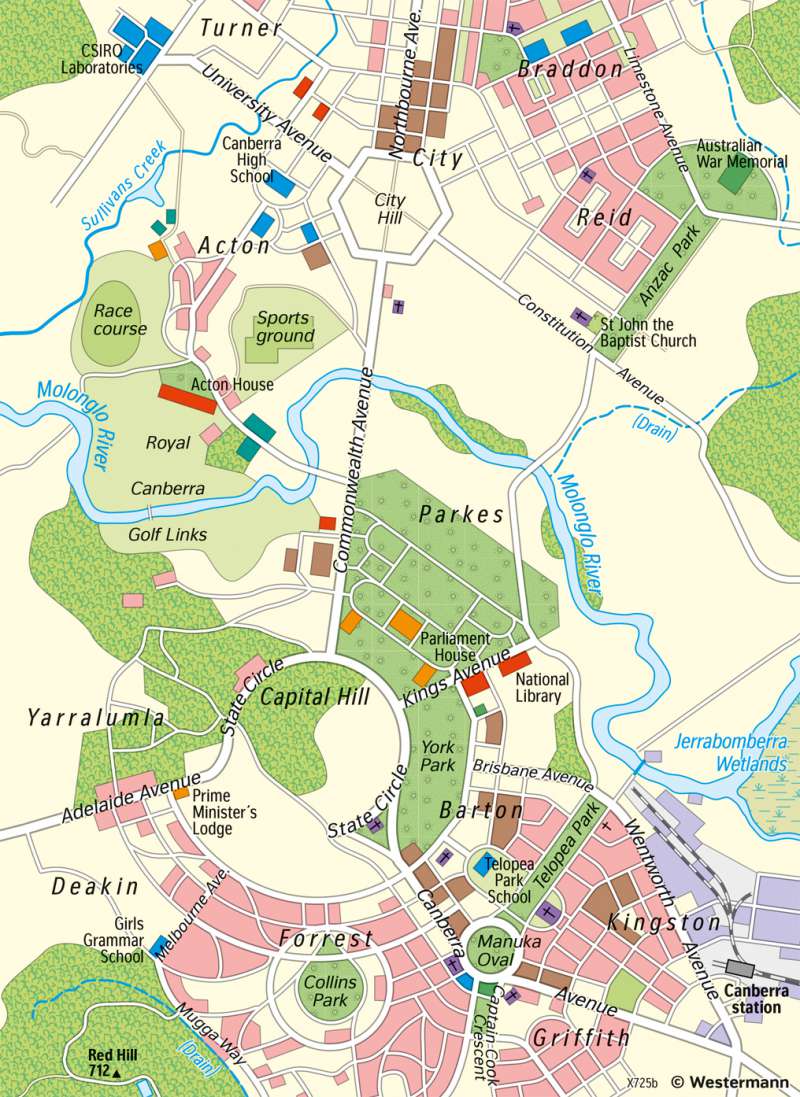 The settlement of the region around Canberra by Aboriginal people goes back at least 21,000 years. From the 1820s, European settlers started establishing farmland there. The foundation of the city itself was only in 1913. After the federation of the colonies of Australia the state needed a capital. Following disputes between Melbourne and Sydney, it was decided to build a new capital 150 km from the east coast. Canberra is now Australiaâ€™s biggest inland city and eighth biggest city.

The growth of Canberra has brought about changes to the urban structure. A new government district was created in Russell. An extensive financial and a cultural district were developed northwest and north of Capital Hill. Parts of the former railway station were integrated into the adjacent business district. In general, the developments show the growing importance of the tertiary sector. With about 30% of the workforce employed by the government of Australia and another 10% each working in the fields of health, tourism and education, Canberraâ€™s job market is strongly marked by highly qualified services.

The growth of Canberra has brought about visible changes to the natural environment. From 1960-1964, a dam was built at the Molonglo river in the west of Canberra, creating Lake Burley Griffin. The lake adds a lot to the beauty and tourism potential of Canberra. Also, since 1940, most of Canberraâ€™s temperate forests have been converted to parks and residential areas. In 2020, built-up land makes up about 80% of the area shown in the map.

As many planned cities, Canberraâ€™s functional structure in 1940 showed clear divisions. About 40% of the area shown in the map was built up. The residential parts for the 16,000 inhabitants were located southeast of Capital Hill and northeast of City Hill. At their edge, central business districts developed. The other districts were sparsely built up. Around Capital Hill, some public and political institutions were located. In the north and northwest, there were some educational institutions. Among them are the laboratories of the Commonwealth Scientific and Industrial Research Organisation (CSIRO) which is Australiaâ€™s national science agency.

The maps can be effectively used to train map reading skills. In a first step, they can be connected with the boxes 1 and 3 on the same page. Finding and locating the different types and variations of map symbols can help understanding the way thematic maps process information. In a second step, the comparison of maps can be trained. To do this, a simple method with cut-out paper is described below the map. This method can help focus on different functional parts of the city. It can help making more precise comparisons, e.g. of the% of built-up area north of Canberra in 1940 and 2020. Likewise, changes in the centre of Canberra can be analysed better when limiting the scope of the map. This could help e.g. when comparing the number of government buildings on Capital Hill in 1940 and 2020.