Economy and land use 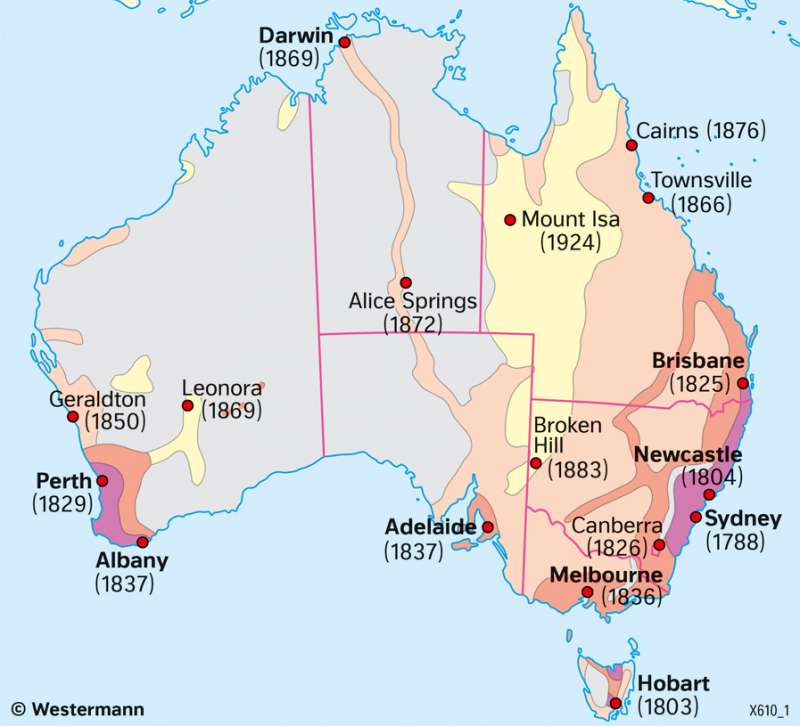 The settlement of the Australian continent by European colonists and the expulsion and murder of its indigenous people, the Aborigines and Torres Strait Islanders, began in 1788 when a fleet of ships from Portsmouth, England, anchored in a small bay on the east coast near present-day Sydney. On board this "First Fleet" were 750 convicts who established a settlement. It was followed by other convict settlements at several points along the coast over the next few decades.

From around 1820, the first British settlers arrived in the country. But it was not until gold was discovered in New South Wales and Victoria in 1851 that immigration increased within a few years. In 1858, the number of immigrants - almost without exception English and Irish - exceeded the million mark for the first time. Among the newcomers, however, were also several thousand Chinese who worked for low wages in the gold mining industry.

Several droughts and the economic depression of the 1890s brought immigration to a temporary halt. After the founding of the "Commonwealth of Australia" in 1901, the racist "White Australia" policy was enshrined in law. The Chinese were forced to leave the country, as were the Melanesians working on the sugar cane plantations. In order to revive the economy, the state increasingly recruited new European immigrants from 1904 onwards. By the time of the Great Depression, about 700,000 new citizens had arrived in the country, about 90 per cent of them again from Great Britain and Ireland.

The immigration boom after the Second World War was initially driven by Central and Northern Europeans, but from 1951 onwards people from Mediterranean countries such as Italy and Greece increasingly immigrated. The legal basis for the immigration of Asians and Africans was created from 1966 onwards. But it was not until the formal abolition of the "White Australia Policy" in 1973, which had blocked the immigration of non-Europeans for a good 70 years, that the era of multicultural Australia began. Although the proportion of Asian immigrants has increased significantly in recent decades, to this day well over 90 per cent of Australians are descendants of European immigrants.