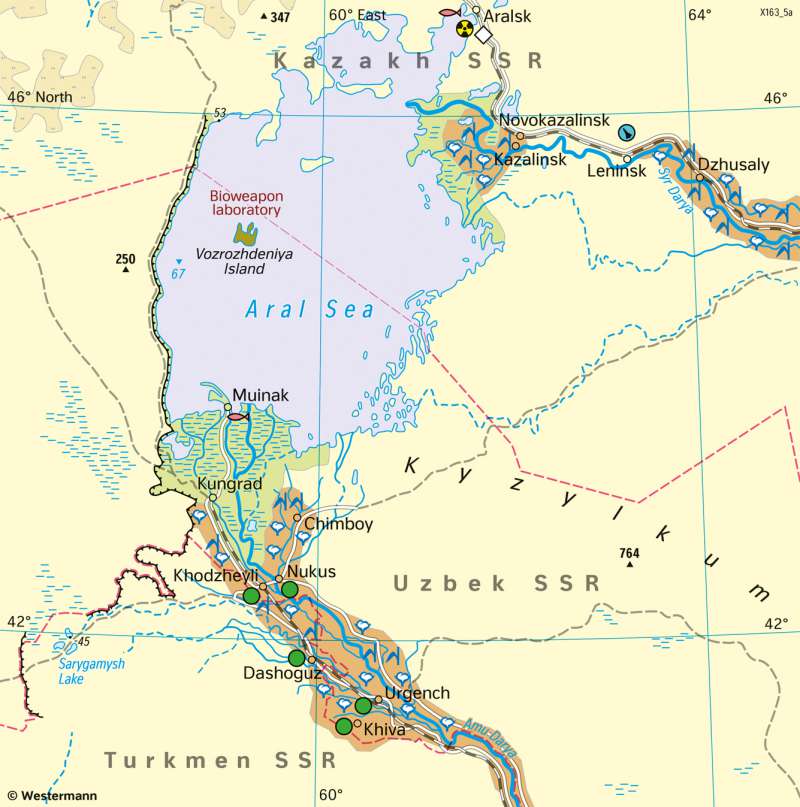 The creeping disappearance of the Aral Sea counts as one of the greatest man-made environmental disasters of the 20th century. In the years between 1960 and 2000 alone, the area enclosed by the Aral Sea fell by more than half, from 68,000 km² to 32,000 km². The former fishing town of Moynaq, where not long ago thousands of people still gained their livelihoods from fishing and fish processing, today is a desert town in which the rusting hulks of ships lie stranded more than 100 kilometres distant from the Aral Sea. In spite of countless environmental conferences, the retreat of the sea continued unbroken until 2004. While until a few years ago the larger of the two remaining seas, the South Aral Sea, was still an unbroken expanse of water, in which the former biological weapons testing station formed an island, today its southern side is completely dried out and it has become even narrower in the north.

Efforts of stabilising the lake ecosystem

Hopes of saving the Aral Sea as a whole no longer exist. Kazakhstan, with the support of the World Bank, has attempted to stabilise the water level in the North Aral Sea by building dykes and improving the irrigation canals. The water level has recovered from its lowest level in 2004 (32 metres) to 43 metres in 2007, and the surface area of this part of the sea has grown by 30 percent. Unresolved, on the other hand, are the manifold social, ecological, and economic problems that the region's inhabitants suffer from due to the encroachment of the desert, the contamination of the soil, and the collapse of the old industries.

The most significant anthropogenic cause of the changes in the Aral Sea was the increasing utilisation of the rivers Amudarya and Syrdarya for irrigation purposes, especially the extensive withdrawal of water from the Amudarya for the Karakum Canal. The background of these measures was the Cold War. To increase its independence from foreign countries, the leadership of the Soviet Union decided, in the early 1960s, to drastically increase the cultivation of rice and cotton. Since these are two of the thirstiest crops in existence, a vast irrigation system had to be installed, which was fed from the two rivers mentioned. The withdrawal of water reached its peak with a total blockade of the Syrdarya at the beginning of 1974, followed by the blockade of the Amudarya in 1982.

Today the irrigated areas for rice and cotton cultivation, which expanded greatly after 1960, are again in retreat. Due to inappropriate cultivation methods, the remaining areas are affected by soil salinisation. Irrigation was carried out without a drainage system, so that vast quantities of water ran to waste. The surplus water ran off into some 40 relatively large, artificial drainage lakes or into small lakes and depressions, where it largely evaporated. Thus, the water from the Amudarya unintentionally also fed the Sarygamysh Lake on the border with Turkmenistan, which as a result grew in size many times over between 1960 and 2007.

From inland sea to desert landscape

The immediate cause of the disappearance of the Aral Sea was the fact that its two tributaries, the Amudarya and Syrdarya, only contributed an average of 5 km³ of water to the sea's annual water balance instead of the former quantity of 56 km³. In many years the rivers did not even reach the sea at all. Since the Aral Sea is situated in a dry region with high summer temperatures, where the average annual rainfall is below 250 millimetres, there was immense evaporation. The low rainfall was nowhere near sufficient to compensate for the losses due to evaporation. Together with the underwater inflows it contributed only 10 km³ per year to the water balance.

The salinity of the dwindling volume of water increased. The high runoff of fertilisers from the irrigated land intensified this process. The former seabed areas that are now dried out are affected by the extensive drift of wind-blown salt and soil. The ecological effects of the changes in the landscape include an increase in salt dust storms to the east of the sea, and the salinisation and pollution of the river water. The alluvial forests in the river deltas, which still existed in 1960, have now entirely disappeared. Commercial fishing had to be shut down in the 1980s, and the still-remaining areas of water are partly ecologically dead or extremely impoverished in their populations of species and individuals. As a consequence of the above-mentioned measures, it has at least been possible to reduce the salinity of the northern Aral Sea again to below 1.5 percent. The Syrdarya once again reaches the North Aral Sea on a permanent basis. Thus, the ecological conditions there have also improved; even fishing has again become possible.

The region around Muinak is now also used for natural gas extraction. Gas pipelines transport the gas to the surrounding cities. A bioweapon laboratory, once located in the middle of the Aral Sea, is now contaminated and abandoned between two of the remaining bodies of water.