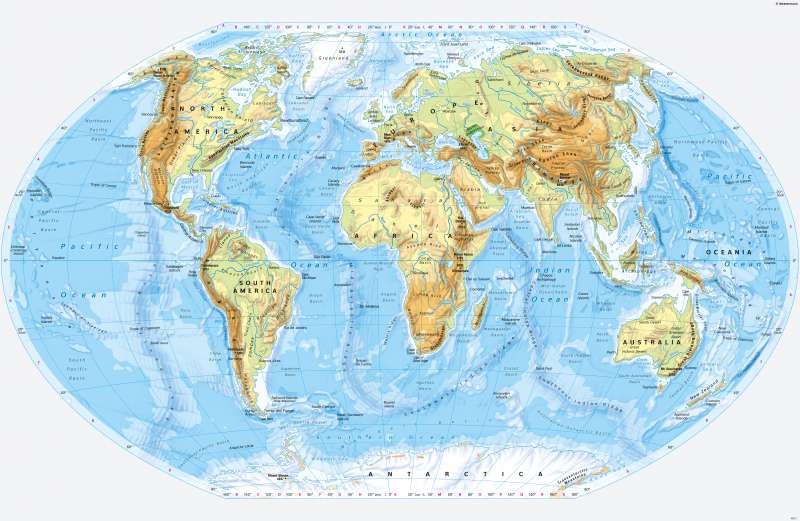 The physical world map of continents and oceans shows essential elements of the of the Earth. Its top layer of rock is formed by either continental crust or oceanic crust. Both differ in their rock composition, density, and thickness.

Around 71 per cent of the Earth's surface is occupied by the oceans. By far the largest of the three oceans is the Pacific Ocean. It contains almost half of the Earth's total water volume.

The continents themselves, but also the adjacent shelf area (0 to 200 metres below sea level), are made up of continental crust. Especially the marginal seas of the oceans such as the Baltic Sea, the North Sea, the Persian Gulf, the East China Sea, and the Kara Sea are classified as continents according to their geological structure. Continental earth crust is on average 30 to 45 kilometres thick, under mountains its thickness is even greater. Due to its typical rock composition (magmatic rocks with comparatively high quartz content, metamorphic rocks, sediments), it has a lower density than oceanic crust. It can therefore rise far above sea level.

The continents themselves are made up of typical elements. The ancient continental cores - such as Greenland, the Australian, Central African, Canadian and Baltic Shields (see 10.1) - are up to 4.6 billion years old. They are also called primeval continents and today generally have low to medium heights. At their edges, folding zones developed in various phases. The geologically newer spaces of this type include the Andes and the Rocky Mountains in America and the Alps, the Caucasus, the Hindu Kush, and the Himalayas in Eurasia. Here, in high mountains, the greatest heights above sea level are reached today. Older folding zones have been eroded and currently have predominantly low to medium heights.

Another structural element of the Earth's surface are extensive alluvial plains in which bodies of water have deposited thick layers of sediment. Examples are Mesopotamia, the Indus Plain and the plains along the lower reaches of the Mississippi, Mekong, and Huang He rivers. If they were located in climatically favoured areas of the Earth, the first advanced civilisations of humankind developed there. To this day, these alluvial plains are among the most densely populated regions on earth.

The double continent of Eurasia is the largest land mass on earth, well ahead of America and Africa. Australia and Europe are the smallest continents on earth by area. In Greenland and Antarctica, the uppermost rock layers are almost completely covered by glaciers - together this makes up about one tenth of the Earth's land area.

uartz-poor igneous rocks whose density is greater than that of continental crust, and only rises above the water surface as an exception. Oceanic crust is continuously formed in the mid-ocean ridges and is geologically very new â€“ it is never older than 200 million years.

The centre of gravity of the oceanic crust lies in the southern Pacific. The centre of gravity of the continental crust, on the other hand, is in Eurasia in the Northern Hemisphere. This imbalance in land-water and crustal distribution has consequences for climate, but also for the position of the magnetic and geomagnetic poles (see illustration 11.11 and page 198/199).