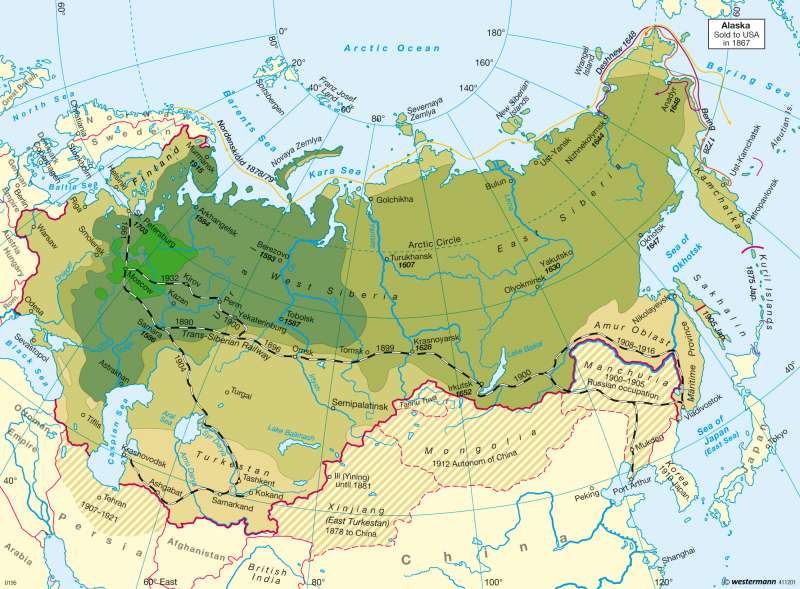 The core of the Russian Empire (the eastern tableland) had been settled through the centuries by numerous ethnic groups. Attacks by Arab tribes in the early 8th Century, the Finno-Ugric Hungary passage and the arrival of the Varangians, who come from the Northeast (Swedish Vikings who founded the Kievan Rus') and finally the 200-year rule of the Mongols, resulted in the subjugation of various pastoral and nomadic peoples and contributed to the unusual ethnic diversity of latter day Russia. From 1462, it was reinforced through the continuous expansion from the European Baltic Sea to the Pacific Ocean and from the Arctic Sea to the steppes of Central Asia.

Expansionist policy
An important step towards the creation of the Russian Empire was the growth of Moscow in early 14th Century. One hundred years after the Mongols had conquered all the Russian principalities, Prince Ivan Kalita was given the dignity of a grand duke by the Mongol Khan in 1328 and the merger of the territories of the former Kievan Empire was initiated. From 1462, the "gathering of Russian land" was promoted under Ivan III "the Great", grand prince of Moscow. After the annexation of numerous principalities, he proclaimed the right of Moscow to take part in the Byzantine-Christian heritage. His successors Vasily III (1479—1533) and Ivan IV "the Terrible" (1530—84), continued the expansion of the Russian Empire. Ivan III, who took the title of Russian czar, first conquered the Mongol Khanate of Kazan and Astrakhan and began to conquer Siberia in 1582 with the help of the Cossacks. In 1598, the end of the Rurik Dynasty brought about the "time of troubles", which ended in 1613 with the accession of the House of Romanov. The following decades were marked by social tensions and civil unrest, however, the Ukraine was obtained in the middle of the 17th century.
Under Peter I "the Great" (1682—1725), Russia became a major European power with a new capital, St. Petersburg. Under his rule, important regions were captured mainly in the European half of the empire. Baltic Russia gained an unchallenged supremacy, first through the conquest of the Crimea, the Black Sea coast and also through the partition of Poland under Empress Catherine II (1762—96). Through the integration of Finland (1809) and Russia's leading role in the victory over Napoleon (1813—1815), it finally became a European superpower. After Russia had also obtained Bessarabia (1812) and the Danube Delta (1829), it then was halted by Britain and France in its further expansion to the west during the Crimean War between 1853 and 1856. Russian expansionism in the East ended with the Russo-Japanese War of 1904/1905.

Modernisation and serfdom
Peter I wanted to europeanise the Russian Empire with a comprehensive approach. However, the price was high and was mainly carried by the peasants who were subjected to an intensified form of serfdom in the late 17th Century. Both the Russian policy of expansion and modernisation involved basic costs. The subsidisation of western-style factories, maintenance of an expensive fleet and the drawing board construction of a proposed magnificent city along with the army had tremendous costs. To finance the government's programme, Peter "the Great" introduced a new conscription law and a number of special taxes both of which added burden to villages and farmers. The status of farmers was that of serfs, the lowest social class, which had counted for about one tenth or more of the Russian population in the 16th and 17th Century. Catherine II tightened the bondage further, despite the numerous rebellions which took place in the 19th Century.
K. Lückemeier, E. Astor; Ü: C. Fleming 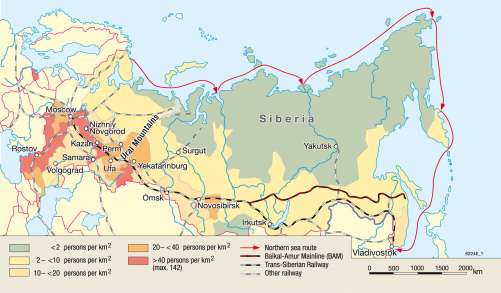 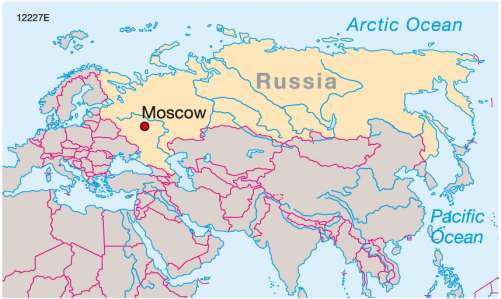 The location of Moscow