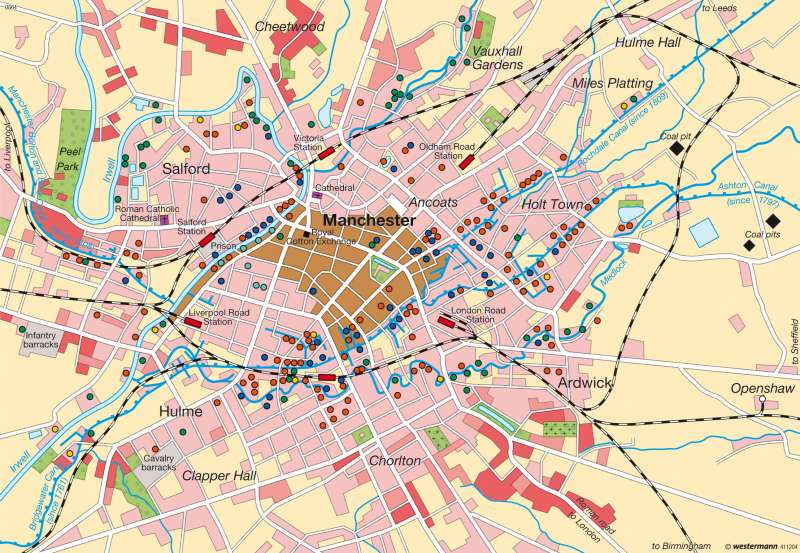 The cradle of the Industrial Age stood in England, where the invention of the steam engine by James Watt in the late 1760s paved the way for rationalization, mass-production and a revolution in transportation brought about by the railroads. Two spinning machines were introduced to the market at practically the same time: the muscle-powered spinning jenny and the water-powered water frame. The first mechanical loom followed in 1784.
These inventions triggered a revolution in the textile industry. Countless textile workers lost their jobs and were forced into poverty. Cotton textile production in England rose from 1,300 tonnes in 1760 to 190,000 tonnes in 1860. Manchester was a centre of the English textile industry and for some years the world's most important industrial centre in the 19th century.

Urban structure circa 1850
Manchester's most important advantage as an industrial location was provided by numerous streams along which water-powered cotton mills commenced operations in the 18th century. Cotton was imported from the British colonies and transported to Manchester from the nearby harbour at Liverpool. The industry experienced a boom following the invention of the steam engine and attracted large numbers of workers from the poor rural population.
Canals proved especially advantageous during this period. The Bridgewaters Canal was completed in 1761, followed by the Ashdale Canal in 1879 and the Bolton and Rochdale Canals in 1808/09. The coal required to fuel steam engines was transported to the mills along these canals, as local mines were unable to cover the demand alone. Raw cotton and wool as well as finished products were also carried along these water routes. The completion of the railroad line from Liverpool to Manchester in 1829 significantly enhanced the efficiency of the transport system. By about 1850, Manchester boasted a handful of railway stations from which goods were shipped in all directions. These included Salford Station, Liverpool Road Station, Oldham Road Station and London Road Station.
The canals were lined with textile mills of several different types. Other factories, such as iron casting and machine manufacturing plants were also established in Manchester. The Royal Cotton Exchange, the central cotton trading hub, was located in the city' commercial centre.

Population
The city centre was encircled by densely-packed working-class quarters, in which residents lived and worked under miserable hygiene conditions. Building density decreased toward the urban fringes, and wealthier residents even had gardens. Yet most people earned their living as poorly paid labourers.
According to the census of 1851, Manchester and Salford, its neighbour to the west, had a population of 401,000. Over the decades, the demand for cheap labour had risen to the point that it could not be met by English citizens alone. The factories in Manchester also exerted a magnetic attraction on people from other regions. Roughly one-fifth of the labour force was comprised of workers from Scotland, Wales, Ireland and even from the countries on the continent, such as Italy.
D. Falk; Ü: J. Southard