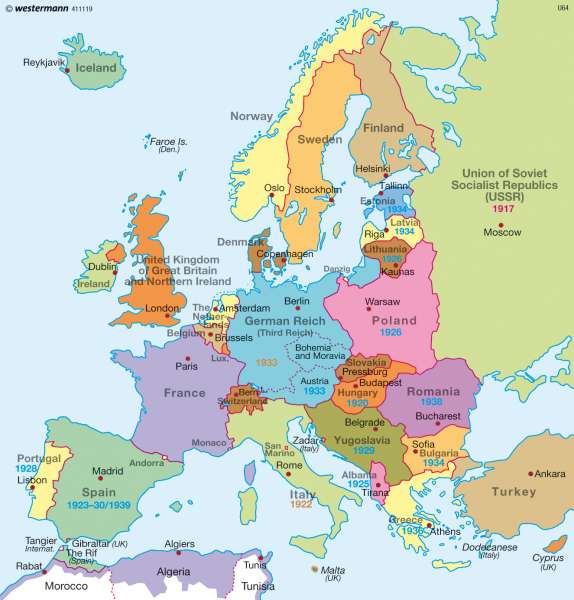 The map of Europe changed significantly after the First World War. The war brought the monarchies in Germany, Austria-Hungary, Russia and the Ottoman Empire to their knees. The older nations and the new republics were unable to establish a stable political order. Smouldering territorial conflicts were compounded by boundary disputes, as the borders of such countries as Poland, Czechoslovakia and the Kingdom of Serbs, Croats and Slovenes had been drawn arbitrarily and with little regard for national or ethnic integrity.

Territorial changes
Under the terms of the Treaty of Versailles, Germany was compelled to make territorial concessions. Aside from substantial territory, the former German Empire lost some six million inhabitants. The creation of the "Polish Corridor" resulted in the isolation of East Prussia from the bulk of Germany. Alsace-Lorraine was ceded to France, the Hlu?ín Region to Czechoslovakia. Danzig was made a protectorate of the League of Nations. In a number of regions (North Schleswig, Upper Silesia, West and East Prussia, Eupen-Malmedy and the Saarland) national affiliation was determined by plebiscite. The Austro-Hungarian Empire was broken apart. The successor nations of Austria, Hungary and Czechoslovakia were established within the territory of the former Habsburg monarchy, while other regions went to Italy, Poland, Romania and the Kingdom of Serbs, Croats and Slovenes proclaimed in 1918.
The Russian Revolution of 1917 was followed by the creation of the Russian Socialist Federative Republic in 1918. The new republic emerged victorious from a series of civil wars but lost terrotiry in the bargain. Belarus and the Ukraine, which had declared their independence after the Russo-Polish War of 1920, were divided between the USSR and Poland. In 1918, the Republic was proclaimed in Poland, which had been united with Russia in a single kingdom since the Congress of Vienna. The former Russian Baltic provinces of Estonia, Latvia and Lithuania also declared their independence in 1918. Finland had become a sovereign state in 1917 and was proclaimed a republic in 1919.
While the borders of Portugal and Spain remained as they had been, Italy made small territorial gains in the North and East. Turkey under Kemal Atatürk secured the territory occupied for the most part by the present republic under the terms of the Peace of Lausanne in 1923. The independent Irish Republic was proclaimed in 1916 and became a free state after ceding the province of Ulster (Northern Ireland) to Great Britain in 1921. Iceland was recognized as a sovereign state under the Danish king in 1918.
The German Reich occupied the demilitarized Rhineland in 1936, thereby violating the Locarno Treaties, with which the European nations, prompted among other things by proposal by German Foreign Minister Gustav Stresemann, had sought to guarantee their territorial integrity in 1925. The invasion of Austria in 1938 and the annexation of Czechoslovakia in 1939 following the Munich Conference, at which the French and British had agreed to the German occupation of the Sudetenland, were the first campaigns in Germany's war of conquest.
D. Bode, K. Lückemeier; Ü: J. Southard