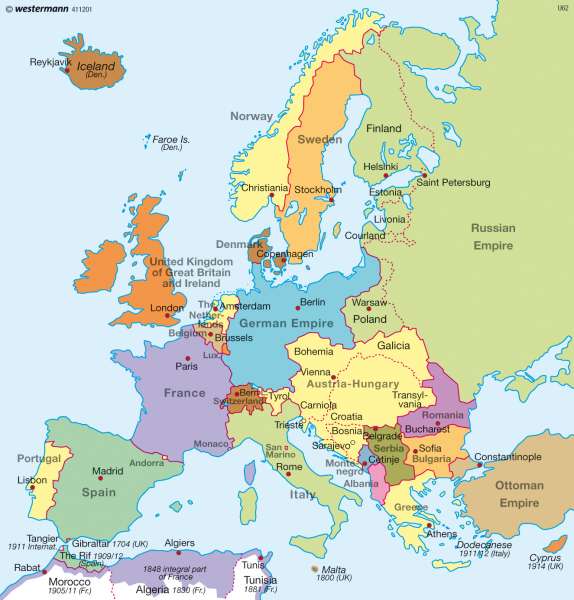 Although the community of European nations in the early 20th century still conformed in part to the boundaries established by the Congress of Vienna in 1815, it had undergone a number of changes in the intervening years, the profoundest of which were most evident in the south-western region of the continent.

Europe in 1914
The largest nation on the eve of the First World War was Austria-Hungary, a multinational state composed of Austrians, Hungarians, Czechs, Slovaks, Ukrainians, Serbs, Croats, Slovenians, Romanians and Italians. The Danube monarchy was a union of the crowns and the peoples of the Austrian Empire and the Kingdom of Hungary.
Italy was nearly as young a nation as the German Empire proclaimed in the Hall of Mirrors at Versailles in 1871. Victor Emanuel II had assumed the title of King of Italy in 1861, although he was a somewhat controversial figure and despite the fact that Rome was still occupied by the French under Napoleon III. The Franco-German War of 1870 offered an opportunity to recapture Rome and make it the capital.
Poland was divided up completely among Prussia, Austria-Hungary and Russia in the third Polish Partition of 1795 and had since disappeared from the map as an independent state. Following the Congress of Vienna in 1815, it had been united with Russia as "Congress Poland" under a single monarch. Under Russian rule since 1809, the grand duchy of Finland enjoyed a certain degree of autonomy in the 19th century. That status was abolished by Tsar Alexander III in 1899 but reinstated by Tsar Nicholas II six years later.
Iceland, which had been a part of Denmark since the 14th century, had also attained partially autonomy during the second half of the 19th century.
Spain had experienced constant unrest and political power struggles since its occupation by Napoleon's troops. The domestic political situation remained unstable until the adoption of the constitution of 1876. The leading colonial power in the early years of the 19th century, Spain was compelled to cope with the loss of nearly all of its territories outside the boundaries of Europe. Most of these were relinquished to the United States in the aftermath of war.

The road to World War
The political tensions that emerged in the years immediately preceding the First World War originated in the waning 19th century. The Age of Imperialism had begun in the 1880s with the struggle for African colonies known as the "scramble for Africa". All of the major European powers sought territories to conquer, and all of them, with the exception of Austria-Hungary, waged wars for the purpose of expanding their domains on other continents. At the same time, the industrialized nations abandoned the concepts of national sovereignty and the liberal traditions of the 19th century. These acquisitive tendencies drove a wedge of envy and aggressive nationalism between competing nations, and caused particular resentment in the German Empire, which found itself encircled by enemies and robbed of the colonies to which it felt rightly entitled.
The risky foreign policy pursued by Germany during the reign of William II, which repeatedly offended the neighbouring powers — particularly following Bismarck's dismissal — and openly announced the ambitious plan to establish a "strong German navy", caused alarm among the nations of Europe. The two Morocco crises of 1905 and 1911 and the annexation of Bosnia and Herzegovina by Austria in the summer of 1908 contributed to the mounting tension. Great Britain, France and Russia — the Allies — and the Axis powers Germany and Hungary made preparations for war, which included the development of new weapons systems. At the same time, the military forces of the continental European powers ballooned into armies of millions following the introduction of universal conscription.
The First World War opened the eyes of the world to the dark side of modernity and progress. War was waged not between armies but between peoples. New means of communication and new forms of propaganda enabled the warring powers to mobilize entire nations within a matter of days. Moreover, military forces had access to new weapons of mass destruction, such as machine guns and poisonous gas grenades. Aircraft were used for aerial reconnaissance and as aids in locating the enemy. Some ten million people from 32 participating countries lost their lives during this war.
D. Bode, K. Lückemeier; Ü: J. Southard