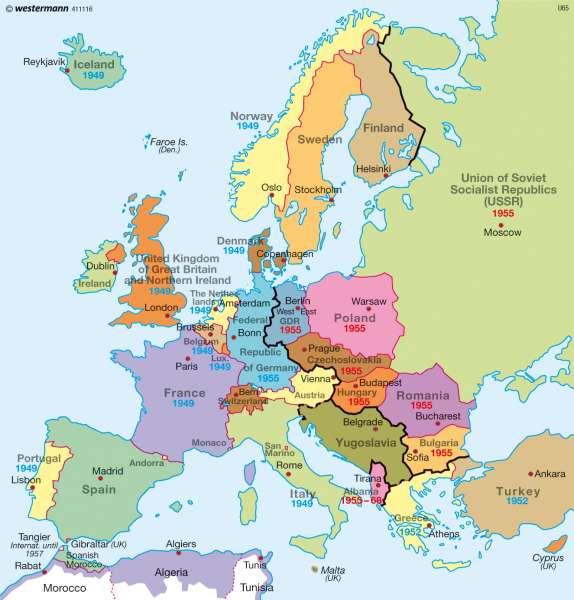 The Second World War ended in defeat for the Central Powers of Germany, Italy and Japan at the hands of the Allies. The concerted allied effort gave way to a growing conflict which culminated in the de facto division of the continent by the Iron Curtain. On the one side of the dividing line stood the East Block, a group of nations under Communist or socialist rule and dominated by the Soviet Union. These countries engaged in economic cooperation within the framework of the Council for Mutual Economic Assistance and formed a military alliance under the terms of the Warsaw Pact. They were opposed by a group of Western, "capitalist" industrial nations oriented primarily toward the United States, which joined the U.S. and Canada to form the NATO military alliance in 1949.
Yugoslavia and Albania remained relatively independent of Soviet influence. As a socialist state, Yugoslavia stood apart from the rest of the East Block and pursued a more open policy toward the West. In addition to other factors, this was made possible by the fact that the country had not been liberated by the Soviet Army but rather by a partisan army under the command of Josip Tito, who played an instrumental role in promoting the integration of Yugoslavia's diverse nationalities and ethnic groups.
The year 1961 witnessed a historic turning point in Albania. In response to Soviet criticism of the "Stalinist" regime under Enver Hoxha, the nation broke off relations with Moscow and turned to the People's Republic of China for support. Albania seceded from the Warsaw Pact in 1968.

Western Europe
The political situation in post-war France was characterized by the opposition between the provisional government established by Charles de Gaulle in Algeria in 1944 and the left-wing groups of the former Résistance. Although De Gaulle succeeded in re-uniting the divided nation by involving these groups in his government, France experienced a series of internal political crises that lasted well into the 1950s. In Great Britain, national political disputes were carried out within the framework of the traditional two-party system. Reforms initiated by the Labour government of Clement Atlee helped alleviate social conflicts.
The territorial changes brought about by the war were nowhere as profound as in the country that had caused it: Germany. Divided by the Iron Curtain, the nation was compelled to live with the presence of the Cold War front that ran through the country from north to south. The Federal Republic of Germany was established in the Western sectors, the German Democratic Republic in the East. The German Eastern Territories were lost. Silesia, Poland, Posen, Eastern Pomerania and southern East Prussia went to Poland, northern East Prussia and Königsberg (Kaliningrad) to the USSR.

Eastern Europe
Czechoslovakia was forced to cede the eastern province of Carpatho-Rus to the USSR, but like Austria, was otherwise restored within its pre-war boundaries. Poland had lost territory along its eastern border, but was compensated under the Potsdam Agreement with the former German territories in the West and North.
Beginning in the late 1920s, Josef Stalin gained increasing power and influence in the Soviet Union. After eliminating political opponents within his own party, he became the undisputed ruler and proceeded to strengthen his socialist regime by carrying out a reign of terror and promoting rapid industrialization. With political support from Moscow and backed by the victorious Red Army, communist governments progressively came to power in all of the countries of eastern Central Europe beginning in 1944. This process was completed in Poland in 1952, when the democratic parties of government-in-exile were excluded. The London exile groups formed a coalition government with the Communists in Czechoslovakia in 1946. The new government resolved to participate in the Marshall Plan, but retracted its commitment under pressure from the Soviet Union. The Communist Party gained complete power in 1948. The Communist ruled alone in Hungary after 1952, in Romania after 1948 and in Bulgaria after 1952.
D. Bode, K. Lückemeier; Ü: J. Southard